Variety of the National Capital Region

Due to pregnancy complications, Spike was born at 28 weeks weighing only 2.3 lbs, which resulted in a diagnosis of quadriplegia cerebral palsy.  Spike normally got around by crawling commando or strapped into an uncomfortable piece of equipment.  He got his first taste of bicycle freedom at school when he was four years old, when he rode an adaptive bike specially designed for kids with special needs.  He was so happy riding the bike that his parent tried different ways to get him one, but struggled because of the cost.

Variety was able to fund the cost of the bike and enjoy a visit with Spike’s family.  On a walk around the neighborhood, it was evident that his new bike brought both physical and social changes that are quite exciting .  Spike is now able to pedal on his own for a big part of the journey.  He needs a little push uphill but soon he should be strong enough to do some inclines as well.  His bike is helping his legs and core get stronger all the time.  He is even able to sit up better through the benefits he is getting from his bike.

Beyond the physical benefits that Spike is getting, he now has a whole new world that he is able to explore on his bike.  As he rides, he takes in everything along the way.  Spike talked non-stop about hearing the birds chirping, the planes flying overhead, the flowers growing, cars driving past going varoom and neighbors waving  and calling out to Spike as he rides along.

Spike’s parents said that as soon as he gets home from school, he wants to ride his bike.  And they often have to hide it on rainy days so Spike won’t get upset that he can’t ride.  For Spike’s parents and doctors, it’s therapy.  For Spike, it is something he loves to do… just like all the other kids!

MORE STORIES FROM AROUND THE WORLD 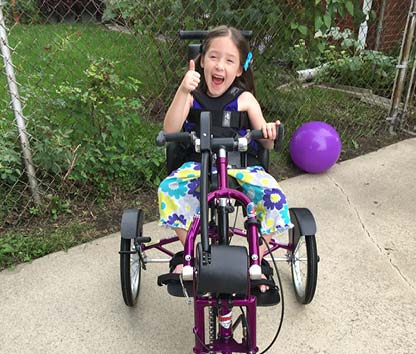 Each December for the past 19 years, Variety the Children’s Charity of Detroit has presented more than 150 bicycles annually,… 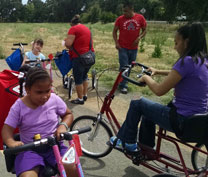 Variety Northern California Freedom Rider – Free To Be A Kid!

Miracle Joy was born prematurely at 23 weeks with several challenges facing her little life, some of which were a… 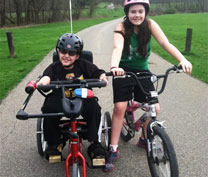 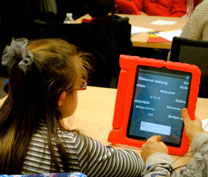 Mary Pat Radabaugh, Director of the IBM National Support Center for Persons with Disabilities once said, “For Americans without disabilities,… 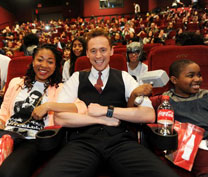 Odley Jean, a high school senior in New York City, had her world rocked by the 2010 earthquake in Haiti...